You are here: Home / Archives for warplane bombing

On Tuesday 14/11/2017, regime warplanes committed a massacre in Al-Susah village, in eastern rural Deir ez-Zor, killing 15 civilians. The raids targeted an assembly of displaced families from Al-Bukamal city, causing deaths and injuries mainly to women and children. SHRC condemns the horrific massacres against the Syrian people that the regime has continued to commit for […]

The death toll in Syria on Tuesday 03/11/2015 reached 79 deaths including seven children, seven women and one killed under torture. In Aleppo, 23 civilians were killed; 18 in al-Ansari and Bustan al-Qasr, two from wounds sustained in previous shelling on the town of Tadif (rural Aleppo), two in clashes with government forces, and […]

The death toll in Syria on Wednesday 02/09/2015 reached 83 deaths including 14 children and 12 women. In the capital Damascus and its suburbs, 45 civilians were killed; 36 in shelling – the majority in Douma, Saqba and Madaya, four in mortar shelling on Jarmana and Damascus, three in clashes with government forces and […] 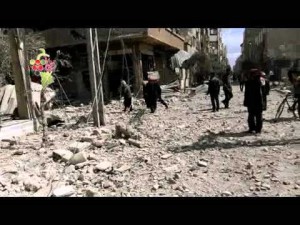 On Friday morning Warplanes targeted the city of Douma (rural Damascus) with four raids, which led to the deaths of six civilians, among them were two children. The raids led to widespread destruction and considerable material damage. The effects of the destruction caused by the four raids. One of the four raids which targeted Douma this […]

The total death toll in Syria on Sunday 18/1/2014 reached 41 deaths including six children, five women, three under torture and one due to the cold weather. In the capital Damascus and its suburbs six were killed; three in shelling on the town of Bazina, two in an ambush by government forces and one in […]

The total death toll in Syria on Wednesday 31/12/2014 reached 50 deaths including 13 children, four women and one under torture. In the capital Damascus and its suburbs eight were killed; two in clashes with government forces, one in shelling, another shot by unknown assailants, three from Douma the cause of their deaths is to […]