You are here: Home / Archives for Wadi al-Naseem 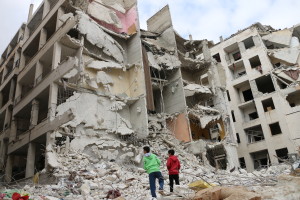 Wadi al-Naseem Neighbourhood lies in the southern part of Idlib, which is condensed with both its original residents and those displaced from other areas. On Monday evening (9th April), at 7.15 a rocket whose source is still to identify, fell on Wadi al-Naseem causing a terrible massacre, scores of wounded and massive destruction. The rocket […]