You are here: Home / Archives for unknown 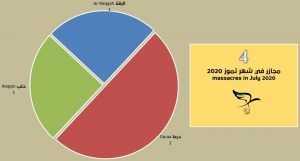 The number of victims documented by SHRC to have been killed in Syria today are nine, among them a child, a woman, and two people that died under torture. Seven were killed in Deir Az-Zor, including three that were executed by an ISIS firing squad, accused of helping civilians from the village of Baghuz to escape. […]