You are here: Home / Archives for Turkish authorities

A car bomb exploded in the city of Al-Bab on Tuesday 6th October,  leaving 19 victims and over 100 wounded. The incident, that occurred in the afternoon in the city centre near  Othman Ibin Affan Mosque, which is surrounded by commercial shops and residential buildings, resulted in a strong explosion in a crowded area, […] 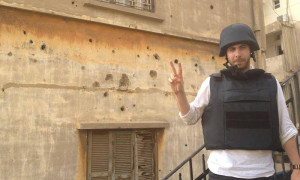 The family of Syrian journalist Rami al-Jarraj have announced that he has been detained in Turkey whilst he was at the Department of Immigration in Gaziantep on Wednesday. His family also said that Rami al-Jarrah was transported by official security elements on Thursday night from his place of detention in Gaziantep which was known to […]