You are here: Home / Archives for targeting places of worship 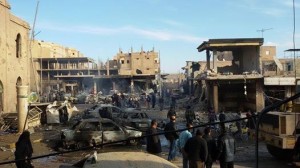 Several raids by the Syrian military air force on the city of Ar-Raqqah led to the deaths of more than 50 people, and injuring tens of others; all civilians, according to preliminary reports. These raids have targeted the industrial zone in al-Sawajeen neighbourhood, al-Asfar warehouse (north of the city), mosque al-Hani, al-Mashlab, Museum Square and […]