You are here: Home / Archives for Talbiseh 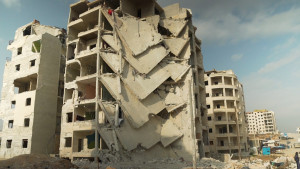 Building collapsed due to the regime’s shelling The total number of victims documented by SHRC on (Monday 9-4-2018) is (26) persons including (14) children and (6) women. In the province of Idlib, (19) civilians were killed, including (17) due to the shelling of al-Naseem neighbourhood which caused the collapse of 7 storey building, killing most […]