You are here: Home / Archives for Starvation

The total number of victims (which we were able to document) in Syria on Sunday 10/12/2017 reached 12 deaths. Among the victims was a child. In Ar-Raqqah, five civilians were killed, three found shot in the head in one of the buildings, and two in a mine explosion remnants of ISIS. In addition, three […]

The death toll in Syria on Wednesday 26/07/2017 reached 36 deaths including six children and six women. In Ar-Raqqah, 20 civilians were killed; 15 in Russian airstrikes on a camp for the displaced in the town of al-Sabkha, four in international alliance shelling, one in artillery shelling by Qasd militia, and one as a […]

The death toll in Syria on Tuesday 09/02/2016 reached 74 deaths including 12 children, 10 women, and one killed under torture. In rural Damascus, 23 civilians were killed; 14 in clashes with pro-ISIS forces in the town of al-Damir, six in clashes with government forces, one in shelling, another as a result of starvation […]

The death toll in Syria on Saturday 30/01/2016 reached 52 deaths including seven children, eight women, and one killed under torture. In Deir Azzour, 18 civilians were killed, 17 in shelling on the towns of Hatla, al-Haseeniya and al-Hisan, and one as a result of malnutrition due to the siege imposed by ISIS on government […]

Activists in the two cities of Madaya and al-Zabadani have documented the death of 48 people in the last two months due to the siege of their cities. Among them, 33 died due to lack of food and medicine whilst seven died due to land mine explosions, and six were killed by snipers of the […] 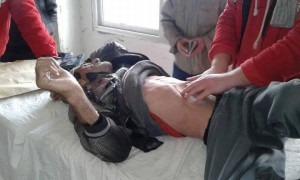