You are here: Home / Archives for Shelling of Ma’arshurin 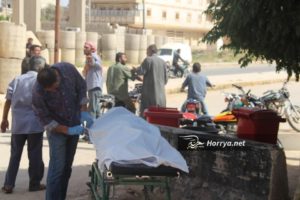 The total number of victims confirmed by the Syrian Human Rights Committee in Syria on Monday 10th June 2019 reached 28 people, including 11 children, 6 women and 1 was killed under torture. In the province of Idlib, 25 people were killed, 24 of them in the bombing of the cities and towns of the […]