You are here: Home / Archives for Shelling of Khan Shaykun 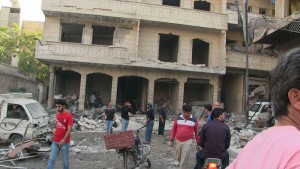 Khan Shaykhun, Idlib   The total number of victims documented by the Syrian Human Rights Committee on Wednesday, 13-2-2019, reached 11 people amongst whom two children and one person killed under torture. In Deir ez-Zor, three people were killed in a landmine explosion while collecting “truffles” in al-Bokmal desert. In Idlib province, two people were killed […]