You are here: Home / Archives for Sham al-Hawa 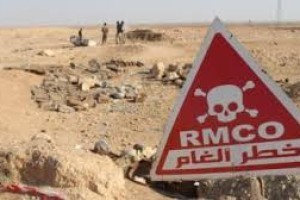 Today Saturday, five children were killed in a landmine explosion in the village of Sham al-Hawa near the town of Al-Ra’i in the countryside of Aleppo, and several others were wounded. The mine is believed to have been left behind by ISIS  while controlling the village. The victims are: Arwa Al-Zakwan Bashair Al-Zakwan Sherif  Al- […]