You are here: Home / Archives for severe cold and malnutrition 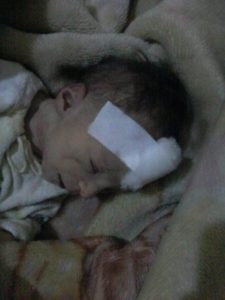 Infant/ Fatima Jalal died due to severe cold and malnutrition The total number of victims documented by the Syrian Human Rights Committee on Wednesday 16-1-2019, reached 12 persons including: (3) children and a woman. In the province of Aleppo 12 people, including twelve civilians were killed by the bombing of a restaurant frequented by US […]