You are here: Home / Archives for Sarin

The UN inspectors investigating the chemical weapons attack on two suburbs in Damascus last month weren’t supposed to point the finger at the party responsible for the killings. But even so, theSellstrom report revealed key details of the attack that strongly suggest the government is to blame, and may even help identify the location from which […] 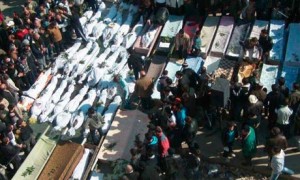