You are here: Home / Archives for russian air raids

The raids of the Syrian regime and Russian air forces continued on the eastern towns of the Eastern Ghouta. Today Friday, ten civilians were killed and the same number were injured following the raids on Harasta, Arbeen, Madiara, Douma and Sakaba. It is worth mentioning that the eastern Ghouta has been besieged for more than […] 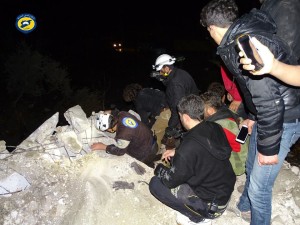 Russian war planes targeted a residential area in the town of Kafranbel (rural Idlib) on Sunday at dawn, killing six people and injuring 15 others. Among those injured was a civil defence officer who was injured whilst rescuing survivors underneath the rubble. The air raids began a little after midnight and continued for several hours. […]