You are here: Home / Archives for rockets attack on the town of Jarjanaz 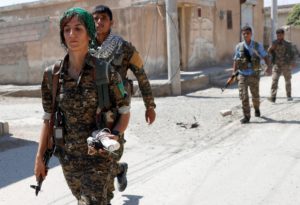 The SDF Kurdish militia shot dead a person in their raid on the desert village of Abu al-Nitel The total number of victims documented by the Syrian Committee on Wednesday, 6-2-2019,  reached three persons amongst whom a child and one died under torture. In Deir ez-Zor, one person was shot dead by the Kurdish  armed […]