You are here: Home / Archives for regime shelling 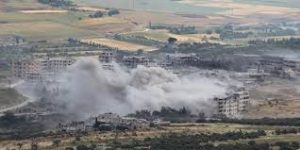 Jisr al-Shughur under Syrian regime fire The total number of victims documented by the Syrian Human Rights Committee (SHRC) in Syria on Wednesday 27-11-2019 was one person. In Idlib province, one person was killed due to shelling by regime forces in Bkfla area of Jisr al-Shughur countryside. SHRC has documented the following victim: 1- Ahmad […]

Khan Shykhun, Idlib Under fire  The total number of victims documented by the Syrian Human Rights Committee on Tuesday (19-2-2019) reached 19 people of whom 9 children, 2 women and 2 died under torture. In the province of Deir ez-Zor, eight persons were killed: a lady and seven children were shot by the Kurdish militia […]