You are here: Home / Archives for Regime rocket launchers kill a girl 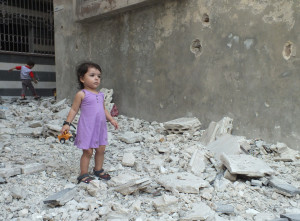 Syrian children are exposed to death due to the on-going bombing on residential areas The total number of victims documented by the Syrian Human Rights Committee on Tuesday 2-4-2019 reached one person. In the province of Aleppo, a girl was killed by shelling of rocket launchers by the regime forces which targeted the town […]