You are here: Home / Archives for Regime attack 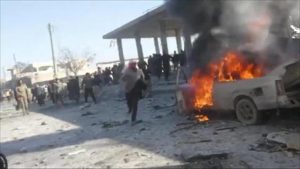 Car bomb in Tal Abyadh kills civilians The total number of victims documented by the Syrian Human Rights Committee (SHRC) in Syria on Saturday, 23/11/2019 reached 7 people including 1 child and 1 person killed under torture. In al-Raqqa province, 4 people were killed when a car bomb exploded in Tal Abyadh city in the […]