You are here: Home / Archives for PYG Kurdish militia 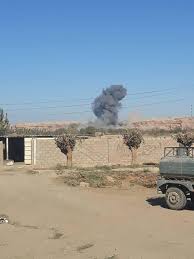 The total number of victims SHRC was able to document in Syria on Friday 7-12-2018 reached nine persons, including 5 children and a woman. In Deir ez-Zor province, 9 persons, 8 of whom were killed due to the bombing of the towns of Hajin and Bobadran by the int. coalition forces and 1 was killed […]