You are here: Home / Archives for olive mill 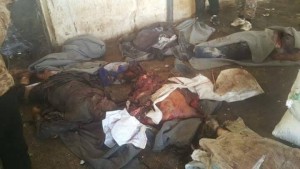 An olive mill belonging to al-Haaj Rasheed, and which lies between the cities of Nawa and al-Sheikh Miskeen in the Daraa province, was subjected to bombing by war planes, killing approximately 25 people who were working in the mill. The targeting of the mill comes during the olive picking season in Syria, in which farmers […]

The death toll in Syria on Thursday 19/11/2015 reached 70 deaths including 14 children, five women, and two killed under torture. Daraa witnessed the killings of 31 civilians; 19 in shelling on one of the olive mills in the town of al-Sheikh Miskeen, eight in another shelling on al-Sheikh Miskeen, two in clashes, and […]