You are here: Home / Archives for Mustafa Baddredine 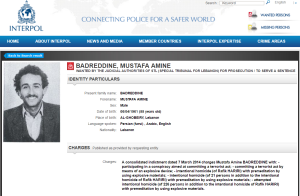 The Lebanese national Mustafa Badreddine, who is wanted by the Interpol due to his indictment of participating in the assassination of former Lebanese Prime Minister Rafeeq al-Hariri, was killed in Syria today under vague circumstances. Facts gleaned from journalism show that Badreddine was a militia leader for Hizbollah, which had raided al-Qusair in the beginning […]