You are here: Home / Archives for motorcycle bomb

motorcycle bomb that targeted Jamal al-Jarmaqani, al- Suwaida city The total number of victims confirmed by the Syrian Human Rights Committee in Syria on Wednesday, 3rd July 2019 reached 11 people of whom a child and a woman and 3 killed under torture. In al-Suwaida province, four people were killed, three by a motorcycle bomb […] 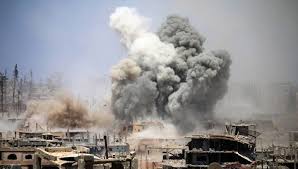