You are here: Home / Archives for medical aid

The number of victims documented by SHRC in Syria today are 11, including two women and eight children. In Rif Dimashq, four were killed, three among them were killed during shelling on the two cities of Douma and Harasta, and died due to lack of medical aid as a result of the siege imposed on […] 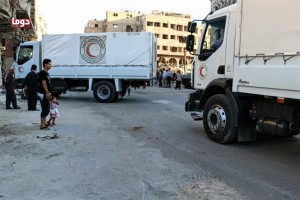 On Friday evening, a convoy of 39 lorries containing food and medical aid entered the city of Douma in rural Damascus. The convoy contained 4000 food baskets and 4000 bags of flour. The Red Crescent branch of Douma was handed the medical aid, whilst the local council was given the food baskets and flour, in […]

The UN has announced it will airlift its first food and other aid supplies from Iraq to the Kurdistan region of northern Syria this week. The UN has permission from both the Iraqi and Syrian governments, according to Amin Awad, director of the Middle East and North African Bureau of the UNHCR. “This is the […]

Sixty-nine civilians were killed in Syria on Wednesday 6/11/2013, among them ten women and ten children. The largest number killed was in Damascus and its suburbs, in which 26 were killed, among them two nurses, four from the village of Qaara and three from Sabir (rural Damascus) that were killed in clashes. Twelve from Homs […]