You are here: Home / Archives for Masaran

Ma’saran town under Russian & Regime fires The total number of victims documented by the Syrian Human Rights Committee in Syria on Sunday 22-12-2019 reached 14 people. In Idlib province, (13) people died as a result of the Russian bombing of the cities and towns of the province, the victims were distributed as follows: (6) […] 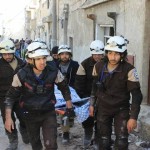 civil defence members help evacuating people and save lives The total number of victims SHRC was able to document in Syria on Wednesday 17-10-2018 was “one person “. In the province of Idlib Hussein Habbush, a civil defence member, was killed while dismantling an explosive device planted in a car in the town of Maasran. […]