You are here: Home / Archives for malnutrition

The total number of victims (which we were able to document) in Syria on Sunday 03/11/2017 reached 48 deaths including 13 children and three women. In rural Damascus, 28 civilians were killed; 25 in shelling on the towns and cities of eastern Ghouta distributed as follows: 16 in Humuriya, four in Arbeen, three in […]

The total number of victims (which we were able to document) in Syria on Saturday 21/10/2017 reached 13 deaths including five children and a woman. In Deir Azzour, nine civilians were killed, eight in Russian and regime shelling on the towns of al-Shaheel, al-Ghabra and al-Hawayij, and one shot by ISIS while attempting to […]

The death toll in Syria on Sunday 13/08/2017 reached 11 deaths. Among the victims was a child. In Ar-Raqqah, three civilians were killed, two in Russian airstrikes on the village of Abu Shahri, and one in international alliance shelling. An additional three civilians died in Aleppo; one from wounds sustained in previous Qasd shelling […]

The death toll in Syria on Saturday 07/01/2017 reached 111 deaths including nine children and four women. A staggering 63 civilians were killed in Aleppo; 58 in a car bomb explosion in I’zaz, three in Turkish artillery shelling on al-Baab, one in shelling on the village of al-Barghuthi, and another in shelling on the […]

The death toll in Syria on Saturday 05/11/2016 reached 40 deaths including seven children and four women. Aleppo witnessed the killings of 25 civilians; 17 in Russian shelling on the towns of Abyan and Darra Azza, the city of Atarib, and the village of Batbu, seven in clashes with government forces, and one in clashes […]

The death toll in Syria on Saturday 30/01/2016 reached 52 deaths including seven children, eight women, and one killed under torture. In Deir Azzour, 18 civilians were killed, 17 in shelling on the towns of Hatla, al-Haseeniya and al-Hisan, and one as a result of malnutrition due to the siege imposed by ISIS on government […] 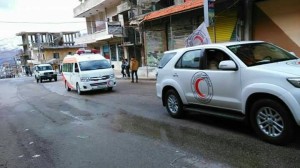