You are here: Home / Archives for Ma’arat Ma’sareen 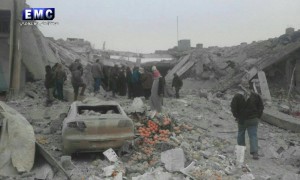 War planes believed to be Russian targeted the Haal market, bakery and residential districts of the city of Ma’arat Ma’sareen (rural Idlib) on Saturday morning with vacuum missiles, killing eight people and injuring approximately 20 others. 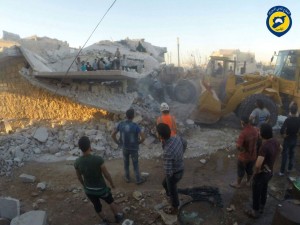 War planes targeted the popular market of Ma’arat Ma’sareen in rural Idlib on the first day of Eid al-Adha, killing 13 people and injuring several others. The massacre took place before the agreement for a ceasefire between the foreign offices of America and Russia came in. Victims identified include: Ahmed al-Abasi Badalah Ahmed Bitar Taghreed […] 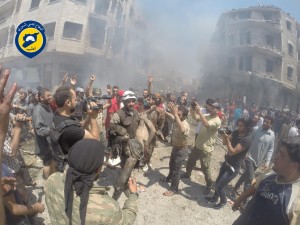 The city of Ma’arat Ma’sareen lies in the countryside of Idlib’s province, 30km south of the Bab al-Hawa border crossing with Turkey. At exactly 9:40 on Tuesday 30/8/2016, war planes believed to be Russian according to activist reports, launched one air strike with several missiles containing cluster bombs on the Haal market of the city. […]