You are here: Home / Archives for Ma’arat Hurma 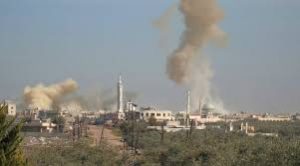 At 10.30 morning (Tuesday 24.4.2018) the Syrian regime’s helicopters dropped a number of explosive barrels on Ma’arat Hurma in the southern countryside of Idlib province leaving (4) civilians dead including a child and a woman in a preliminary outcome of the massacre, in addition to a massive destruction on the scene. Names of Victims: Qusai […]