You are here: Home / Archives for lashing 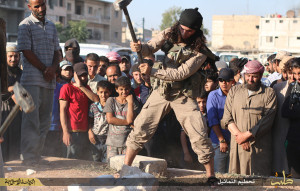 ISIS have published photos in which some of its members are seen to be destroying statues from the city of Palmyra (Tadmur), which were said to be with a smuggler who was trying to smuggle them from Syria via the northern borders. He was apparently stopped in the city of Manbaj in the eastern Aleppine […]