You are here: Home / Archives for killed under torture in the regime’s prisons

Khan Shykhun under the regime and Russian fire The total number of victims confirmed by the Syrian Human Rights Committee in Syria on Saturday 13th July 2019 reached 23 people, of whom 7 children, 3 women and 2 people who were killed under torture. In Idlib province, 13 people were killed,of 12 due to the […] 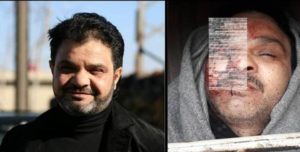 Media activist Majid  al – Asimi was executed by the regime forces after two days of arrest The total number of victims documented by the Syrian Human Rights Committee on Monday, April 15, 2019 reached 7 people of whom 2 women and 2 persons killed under torture. In Deir ez-Zor province, 3 people were […]