You are here: Home / Archives for killed by gunmen 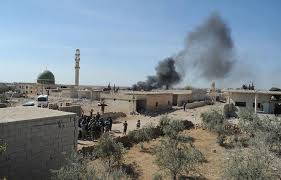 The Syrian regime shelling of Hama countryside The total number of victims documented by the Syrian Human Rights Committee on Tuesday 20-3-2019 reached 10 people of whom 3 children and a woman. In the province of Deir ez-Zor, 5 people were killed, of whom a man and his son, by unidentified gunmen in the village […]

Prison cell The total number of victims SHRC was able to document in Syria on Tuesday 18-9-2018, reached 5 people including: (2) under torture. In Al-Hasakah province, 2 persons were killed while grazing sheep by a landmine explosion left by ISIS  in the village of Al-Faj in the province eastern suburbs. In the province of […]