You are here: Home / Archives for Jandarma 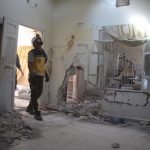 The Syrian Human Rights Committee has documented a total of seven people killed in Syria on Monday 14/10/2019, amongst them three children and two women.  In Idlib province three people were killed, amongst them a child and mother due to rocket shelling by the Syrian regime, targeting Al-Baarah village. Another woman was killed by Turkish […]