You are here: Home / Archives for Iranian militia 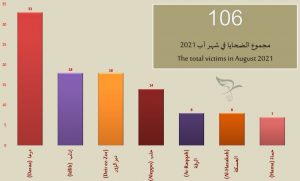 SHRC documents the killing of 106 people in August 2021 The Syrian Human Rights Committee (SHRC) documented the killing of (106) people in Syria during August 2021, including: (33) children, (12) women, and (7) people who were killed under torture. The Syrian regime forces were responsible for the death of (45) people, and the Russian […] 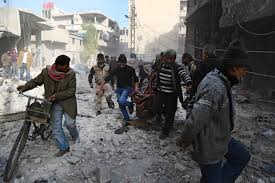 The total number of victims in Syria as documented by SHRC on Wednesday (14-3-2018) is (57) persons including (8) children and (10) women. In the province of Rif Dimashq, (42) persons were killed due to the air strikes and artillery bombardment by the regime forces, Russian warplanes and Iranian backed militia on the towns of […]

The death toll in Syria on Friday 16/12/2015 reached 13 deaths including two children. Aleppo witnessed the killings of five civilians, four executed at the hands of Iranian militias during an interception of a convoy that was exiting Aleppo, and one in clashes with government forces. In Homs, three civilians were killed in shelling […]