You are here: Home / Archives for Interior minister 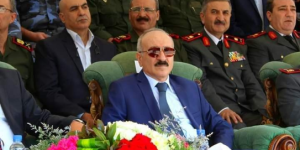 In his most recent cabinet reshuffle, Bashar al-Assad appointed Major General Mohammed Khalid Rahmoun as interior minister, replacing Mohammed al-Sha’ar in that post. Rahmoun, who came from Khan Shikhoun in Idlib, has been the head of the Political Security Division since 2017 and was the head of the Air force Intelligence Branch in Harasta since 2011. According […]