You are here: Home / Archives for hunger 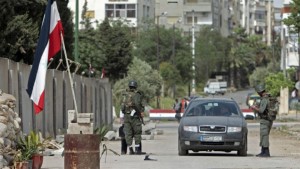 Last Thursday, six children were arrested at the security checkpoint leading into the city of al-Wa’ar in Homs. The children, who are junior certification students, were in Homs at a ceremony with the Governor of Homs Talal al-Barazi and Sheikh Isam al-Masri, in which the students were provided with a meal and a bag of […]

Fifty-six civilians were killed in Syria on Wednesday 23/9/2014, among them six children, six women, three killed under torture, and seven killed by the international alliance. In Damascus and its suburbs, 40 were killed, including 19 that perished in shelling on Douma and al-Maqilibia, as well as 10 that were killed in clashes with regime […]