(London) – At least 147 people whose bodies were found in the city of Aleppo’s river between January and March, 2013, were probably executed in government-controlled areas. Local residents and activists setting up a grid in the Aleppo river to catch bodies floating down the river.   Human Rights Watch visited the site where the […]

Free Award-Winning Journalist, Colleagues   (New York) – The international community should urge the Syrian authorities to immediately and unconditionally release and drop all charges against a freedom of expression activist and two of his colleagues, 19 regional and international human rights organizations said today. Mazen Darwish and two of his colleagues from the Syrian […]

Video Appears to Show Commander Mutilating a Corpse   Human Rights Watch has reviewed graphic evidence that appears to show a commander of the Syrian opposition “Independent Omar al-Farouq” brigade mutilating the corpse of a pro-government fighter. The figure in the video cuts the heart and liver out of the body and uses sectarian language […] 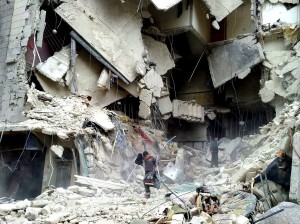