You are here: Home / Archives for heavy machine guns

The total number of victims SHRC was able to document in Syria on Wednesday, September 12, 2018, reached 2 including a child. In the province of Aleppo, two persons were killed. One who is a child was killed by a landmine explosion under a water tap in a car washroom south of al-Hikma hospital in Manbaj city. The other was […] 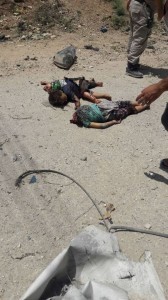 The number of victims SHRC managed to document in Syria on Sunday 10-6-2018 reached 37 people, amongst them 12 children and 2 women. In Idlib province 12 people were killed due to the bombing of the towns and cities of the province. They were distributed as: 12 people in Taftanaz because of targeting children hospital, […]