You are here: Home / Archives for Ghouta massacre 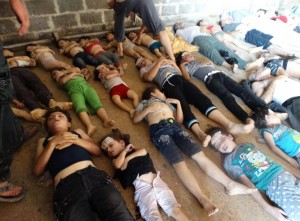 On 21/8/2013, regime forces targeted the areas of Zamalka and Ain Tarma in the Eastern Ghouta and the city of al-Mu’adamiya in the Western Ghouta with rockets laden with chemical substances, killing 1400 people and afflicting hundreds with various types of suffocation. This massacre is considered one of the bloodiest in the series of genocides […]