You are here: Home / Archives for Eastern Ghouta 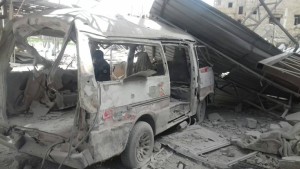 The Damaged Ambulance On Thursday after midnight (8-3-2018), warplanes believed to be Russian targeted a civil defence ambulance in The Eastern Ghouta, killing three paramedics on board and causing substantial damages to the ambulance. Thursday after midnight also witnessed the killing of Mohamad al-Asas, a civil defence volunteer,in centre (215) by a warplanes raid, believed […] 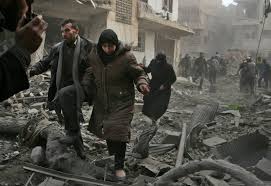 Saqba The total number of victims documented by SHRC on Friday (9-3-2018) was (49) persons including (9) children and (15) women. In the province of Rif Dimashq (49) persons were killed due to the air strikes, artillery and rocket bombardment carried out by the regime forces, Russian warplanes and Iranian backed militia on the towns […]

The total number of victims SHRC was able to document in Syria on Wednesday (7/3/2018) was (113) persons including (5) children and (11) women. In the province of Rif Dimashq (91) persons were killed including (88) due to the regime – Russian bombardments and air strikes on the town of the Eastern Ghouta. Victims were […] 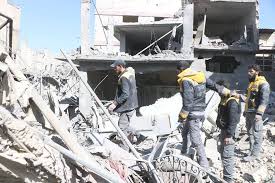 The total number of victims in Syria, SHRC was able to document on Monday 5th March 2018 was (119) persons including (13) children and (5) women. In the province of Rif Dimashq, (100) were killed due to the Russian-Syrian regime air raids on the towns of the Eastern Ghouta. Victims were counted as: (25) in […] 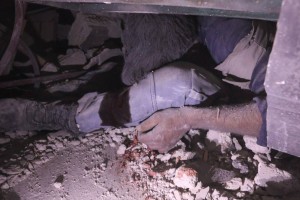 On Monday morning 5/3/2018, the Syrian regime forces targeted with artillery and rockets the residential areas in Jisrin town in the Eastern Ghouta that led to the killing of (11) civilians and other number of causalities. The victims are: Haneen Derbel (2 years old) Kinana Kaboush (5 years old) Mohamad Sam Derbel (3 months old) […]

The victims’ toll SHRC was able to document on Sunday 4th March 2018 was (62) persons including (16) children, (6) women and (1) under torture. In the province of Rif Dimashq (52) persons died including (51) due to the shelling and bombardment by the Syrian regime and supporters on the towns of the Eastern Ghouta. […] 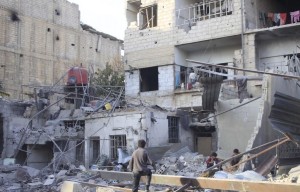 Death toll of victims on Thursday 1st March 2018 as documented by SHRC was 44 persons including 5 children, 4 women and 1 under torture In the province of Damascus countryside 18 persons were killed due to the regime’s – Russian air strikes on the towns of the Eastern Ghouta, in addition to a child […] 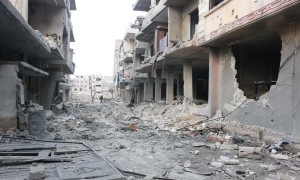 The Syrian Human Rights Committee (SHRC) was able to document on Saturday (24/02/2018) the killing of 74 civilians in Syria including 22 children and 19 females. In Damascus Countryside province, 58 civilians were killed due to the bombardment on the towns of Eastern Ghouta by the Syrian regime – Russian alliance. Victims were distributed: 29 […]

The Syrian and Russian forces continue their air and missile attacks on the towns of Eastern Ghouta in Damascus countryside. Civil defense sources and local correspondents reported that 25 civilians were killed Thursday morning (8/2/2018) in the towns of Jisrin, Kafr Batna, Sakba, Hamuriya and Arbin. Many of Jisrin inhabitants are still under rubble following […]