You are here: Home / Archives for died under torture in Sednaya military prison 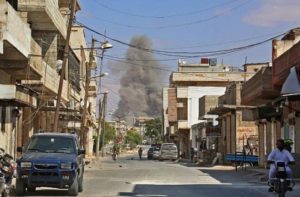 Many civilians and children were killed by the shelling of Idlib towns by the regime artillery  The total number of victims documented by the Syrian Human Rights Committee on Tuesday, 12-3-2019 reached 9 people of whom a child, a woman and 4 died under torture. In the province of Idlib, 3 people were killed: two […]