You are here: Home / Archives for died of his wounds 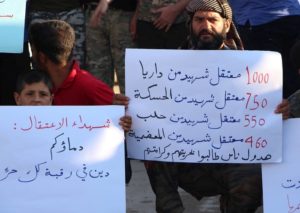 Thousands of Syrians were killed in prisons under torture The total number of victims documented by the Syrian Human Rights Committee on Saturday, 30-3-2019, reached 4 persons, of whom a woman and 3 were killed under torture. In the privince of Hama, two people were killed, one of them a woman who died of her […]