You are here: Home / Archives for Democratic Federation of Northern Syria 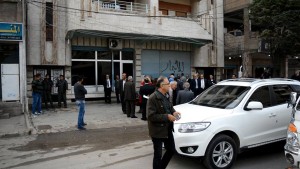 Asayish forces belonging to the Democratic Federation of Northern Syria (DFNS), broke into the premises of the fourth Kurdish National Council conference in Qamishli city. The forces beseiged the venue on Corniche Street then officially closed. The Asayish said the conference was prevented because the parties that the National council consists of and the conference itself were […]