You are here: Home / Archives for darkoush 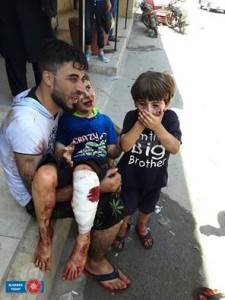 On Friday- the third day of Eid al-Fitr- the town of Darkoush in western rural Idlib was subjected to bombing by long-range ballistic missiles, killing 23 people and injuring approximately 70 others. The bombing targeted the old market and the Cornische area opposite to the river. It is thought that the missiles were fired by Russian […]

One hundred and twenty-seven civilians were killed in Syria on 14/10/2013, among them ten women and fifteen children. The largest number killed was in the city of Idlib, which witnessed a massacre against the families of Darkoush (rural Idlib) in which 40 were killed due to the explosion of a car in the village market. […]