You are here: Home / Archives for Dana Cell 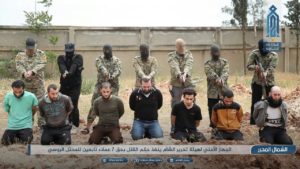 Sham Liberation organisation (HTS) executed seven people by firing squad on charges of collaboration with Russia. On Saturday morning, the organisation security apparatus released pictures of seven people and their executioners. The detainees appeared unmasked while the executioners were masked. The security apparatus claimed that the detainees belong to what is known as (al-Dana cell). […]