You are here: Home / Archives for Cluster Bombing

The death toll in Syria on Friday 28/10/2016 reached 21 deaths including six children and a woman. Aleppo witnessed the killings of ten civilians; three in remnants of a cluster bomb explosion in Sarmeen, one in shelling, another in a mine explosion remnant of ISIS, two in clashes with ISIS, and three in clashes with […]

The death toll in Syria on Wednesday 27/01/2016 reached 86 deaths including 16 children, and 23 women. In Homs, 30 civilians were killed, 25 in an explosion on the government controlled neighbourhood of al-Zahra on 26/01/2016, and five in cluster bombing on the town Kafrlaha. Deir Azzour witnessed the killings of 28 civilians; 26 […]

The death toll in Syria on Tuesday 19/01/2016 reached 41 deaths including four children, two women, and two killed under torture. Aleppo witnessed the killings of 15 civilians; nine in clashes with ISIS, four in mortar shelling on Salah al-Deen neighbourhood, one executed at the hands of ISIS in Manbaj, and another under torture […] 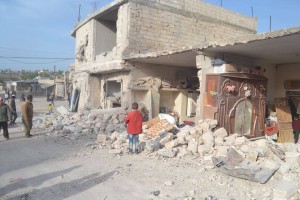