You are here: Home / Archives for car bomb explsoion 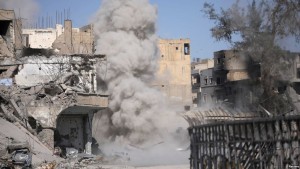 Landmine exploded in Daraa leaving destruction and killing a number of residents The total number of victims SHRC was able to document in Syria on Saturday 4-8-2018, reached 13 including two children and six persons died under torture. In the province of Daraa (3) people were killed, amongst them (2) in the explosion of landmines […]

The death toll in Syria on Tuesday 29/12/2015 reached 53 deaths including six children. In Aleppo, ten civilians were killed in Russian airstrikes on the city of Tal Raf’at (rural Aleppo). Homs witnessed the killings of 17 civilians, in two car bomb explosions from unknown sources, in the government-controlled neighbourhood of al-Zahra, on 28/12/2015. […]

The total death toll in Syria on Tuesday 28/10/2014 reached 42 deaths including four children, three women and five killed under torture. In the capital Damascus and its suburbs 16 were killed; nine in clashes with government forces, one killed under torture, one by a mortar shell from an unknown source and five in a […]