You are here: Home / Archives for bombing cities and towns in Idlib province

After Russian air strike on Jisr al-Shughour The total number of victims confirmed by the Syrian Human Rights Committee in Syria on Wednesday 10th July 2019 reached 17 people of whom 4 children, 4 women and 1 person who was killed under torture. In Idlib province, 13 people were killed due to the bombing of the […] 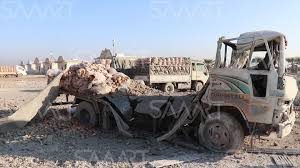 Bombing the city of Saraqeb The total number of victims  documented by the Syrian Human Rights Committee on Sunday, April 7, 2019, reached 13 people of whom two children and one woman. In the province of Idlib, 11 people were killed in the bombing of cities and towns of the province, of whom six people […]