You are here: Home / Archives for blockade 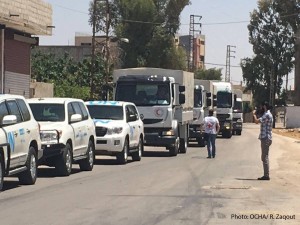 The United Nations has managed to enter a convoy of humanitarian assistance into Daraya (rural Damascus) on Wednesday, with the convoy being the first assistance to enter the besieged city since its blockade began in November 2012. The convoy included medicines and vaccines, although no food items were included. Regime forces and their foreign allies […] 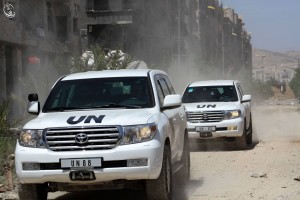 A delegation of the United Nations entered the besieged city of Daraya (rural Damascus) today, in order to assess the needs of the residents and listen to their requests. The delegation met with various civil actors, and visited the sole field hospital in the city, walking through its different departments and witnessing the difficulties faced […] 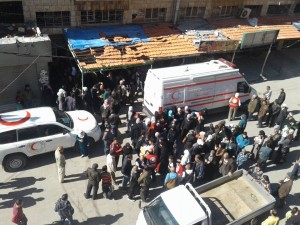 Sixteen days following the partial closure of crossings in Mu’adamiyat al-Sham, Syrian regime forces have strengthened their blockade over the city in rural Damascus. Today, regime forces constructed sand barriers four metres high on the sole crossing which links the city with the capital, Damascus. It also set up barricades and fortifications on the eastern […]

The death toll in Syria on Wednesday 15/04/2015 reached 48 deaths including, 14 children, three women and two killed under torture. In the capital Damascus and its suburbs, 19 civilians were killed; 11 in shelling on Zabdeen in rural Damascus (among them five children) and three shot by a government sniper. Furthermore, two were killed […]

The death toll on Sunday 16/03/2014 reached 67 deaths, including ten women and 18 children. Damascus and its suburbs witnessed killings, including 15 killed in the bombing of explosive barrels on Raas al-Ma’rra (Rural Damascus), six killed in the targeting of a bus carrying them on the road to Rankous and three in al-Hajar al-Aswad […]