You are here: Home / Archives for barrels 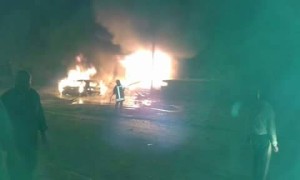 The area of Al-Madeeq Castle in Latakkia was subjected to targeted attacks, leading to the killing of 24 people. Helicopters targeted al-Haara al-Qabliah in Al-Madeeq Castle with over 20 barrels and sea mines on Tuesday evening after the area had been targeted with missiles only 15 minutes before. The names of victims that have been […] 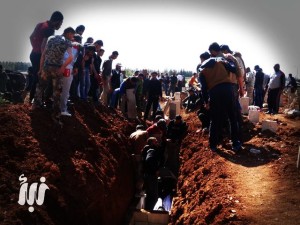 Violent shelling on Daraa Albalad has led to the deaths of 27 people and the injury of 50 others. The shelling- carried out by regime tanks and warplanes- targeted the areas of al-Mal’ab and al-Banurma, where warplanes dropped an interstitial rocket on the district. After civilians began to gather to rescue the victims, the artillery […]

The death toll on Tuesday 18/02/2014 reached 88 deaths, including 11 women and ten children. Daraa experienced the largest number of deaths where the regime forces committed a horrific massacre in the town of al-Mazirib (Rural Daraa) and claimed the lives of 19 people (including three men, four women and three Palestinian children) due to […]

The death toll on Tuesday 4/2/2014 reached 79 deaths. Among the dead were five women, 13 children and 19 dead (Among them 11 from Hananu) who died in bombardment of explosive barrels on Aleppo. And among the dead were a man, a woman and a child from the Yarmouk camp that died as a result […]