You are here: Home / Archives for Ba’ideen 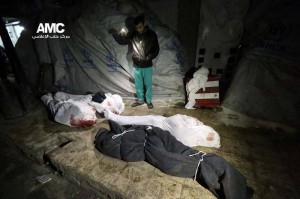 Forty-seven civilians were killed and dozens were injured as a result of the fall of an explosive barrel on Ba’ideen roundabout in Aleppo, shortly after the arrival of two buses from areas controlled by the regime. This massacre occurred hours after a series of massacres carried out by warplanes and regime missiles on eastern Ghouta, […]