You are here: Home / Archives for asad regime 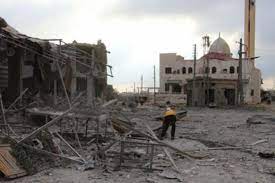 The Syrian Democratic Forces (SDF) of the YPG handed over the Syrian citizen “Ali Abdel Rahman Darwish” to the Assad regime after spending a 3 year term in prison, and after his sentence expired it handed him over violating the most basic human rights rules and subjecting him to the most severe forms of torture […]

On 30/9/2013, 61 civilians in Syria were killed, amongst them three women and eight children. The largest number of those killed was from Damascus and its suburbs, in which 29 were killed. Among them, six were from Douma in rural Damascus and among them three who were killed in clashes in the city. In Daraa […]