You are here: Home / Archives for artist 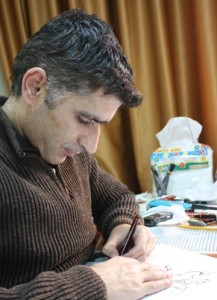 The relatives of cartoonish Akram Raslaan have learnt that he was killed under torture, after approximately three years of imprisonment. The military intelligence arrested Raslaan on Monday 2/10/2012, from the al-Fidaa’ newspaper building in Hama where he worked. The confirmation of Raslaan’s murder comes after two years of leaked information from a released detainee who […]